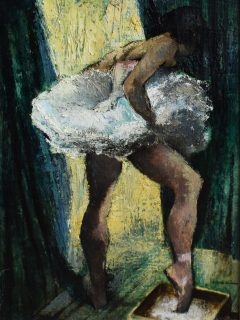 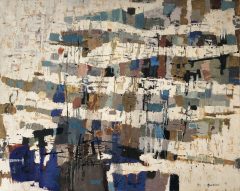 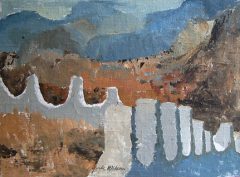 Ronald York Wilson was born in Toronto, in 1907. Following two years of formal education in art at Central Technical School in Toronto, Wilson began a career as a commercial artist at Brigden’s Ltd., where Charles Comfort and Will Ogilvie had an influence on his first paintings. He took night classes at the Ontario College of Art, and later at the Detroit Institute of Art. In 1927, Wilson began working in Detroit where he learned illustration and lettering and was also exposed to museums and books about fine art. However, he lost his job due to the Depression and returned to Canada in 1930. He married his wife Lela in Toronto, in 1932.

Wilson’s independent paintings from the early 1930s to the mid 1950s were representational and satirical, and depicted subjects such as theatrical, burlesque and urban scenes, including his social realist painting Welfare Worker, 1941. He also participated in Toronto’s art scene, and became President of the Ontario Society of Artists from 1946-48, and was elected a full member of the Royal Canadian Academy in 1949, duly submitting a diploma painting, Dancing Class, an expressive figurative work, which was deposited at the National Gallery of Canada in 1950.

In 1949, Wilson’s first six-month sojourn in Mexico at the artist’s colony of San Miguel de Allende became the impetus that changed his life. At age 42, he abandoned his lucrative career in commercial art (where he was known as Ron Wilson), and began working as an independent artist, initially signing his paintings R. York Wilson, and later, York Wilson.  He also became an innovator in the use of new synthetic paints. While in Mexico in the early 50s he met renowned muralist David Alfaro Siqueiros who was already experimenting with industrial paint for outdoor murals. Siqueiros taught Wilson how to use pyroxalin (duco), an industrial material typically used as a car finish. For his Redpath Library mural at McGill University (1953), Wilson found a way to eliminate the gloss finish of pyroxalin by mixing sand with the paint.

Wilson’s new career met with early success. His large scale, semi-cubist painting Toluca Market, 1951, inspired by the modernist social realism of Mexican muralists and painted in pyroxalin using a limited palette of white, black and earth colours, was exhibited with Ontario Society of Artists and won a J.W.L. Forster Award in 1951. In 1952, his painting, Margaritones was chosen to represent Canada at the prestigious Carnegie International Biennial Exhibition in Pittsburgh. It depicted a Mexican theme of textiles, baskets and flower textures painted with a similar palette of dark earth colours arranged within an abstract composition.

In 1955 Wilson returned to Mexico to study another synthetic paint – vinyl acetate – as it was more flexible than pyroxalin (duco) and had a flat, matte finish. Back in Toronto, Wilson worked closely with scientists at Imperial Oil to create (poly)vinyl acetate (PVA), a durable, fluid synthetic paint which he used almost exclusively for his murals including his Imperial Oil commission, The History of Oil, 1957-58, in Toronto. Wilson received a glowing letter of praise from his colleague Lawren Harris for the accomplishment of this work.

Wilson lived a nomadic way of life from 1949 to the late 1960s, travelling extensively in Europe, the Middle East, and Asia. Commenting on his world travels, Wilson explained, Being abroad, I was more able to find myself as a person. I also found that I could explore the new concepts I had in mind much better when applied to a new locale…Travel for me has never been an escape, but rather a reaching into the creative unknown.

Another of Wilson’s major murals The Seven Lively Arts, was completed in 1960 for the O’Keefe Centre for the Performing Arts (now the Sony Centre), Toronto. At the time it was the largest mural ever undertaken in Canada, measuring 30.4 by 5 metres. Restored in 1987, it remains a focal point of the lobby. Wilson’s brightly hued composition portrays the themes of dance, drama, painting, sculpture, literature, music and architecture in a decorative cubist or lyrical abstract style, and includes symbols from ancient through to modern arts. The mural received notoriety as Wilson had to fight a legal battle against the International Brotherhood of Painters, Decorators and Paperhangers of America, eventually winning the right to complete the mural as an independent artist, without joining their union. He received financial support from the Royal Canadian Academy, the Ontario Society of Artists, the Canadian Group of Painters and the Sculpture Society of Canada, who paid half of his legal costs.

Wilson’s painting of the 1960s was primarily abstract, and characterized by a complex manipulation of layers of texture, organic form, shape and colour.  Art historian Paul Duval described a typical work, La Seine, 1963, is characteristic of this period, with its vigorous knifework, textural depths and broken colours accented with emergent jewel-like patches of pure hue. During this period and throughout his career, Wilson also made representational studies of the female nude, laying several figures close together on the page.

Wilson’s ‘Geometric’ series of the late 1960s are a distinct body of work, distinguished by their striped hard-edge compositions, rhythmic design and bold colour. They were subconsciously inspired by the constructivist paintings of his friend Luc Peire, in Paris. As Wilson commented in 1973, My geometric period was the result of two dreams…The result was that from July 1966 until sometime in 1971, I was unable to paint any other style… It is because of experiences like this that it is difficult to understand the creative process.

In 1981, Wilson was honoured by commission for a self-portrait from the Uffizi Gallery, Florence, for exhibition in their gallery of twentieth century self-portraits. He died in Toronto in 1984, at the age of seventy-six.

At the age of 17, began as a commercial artist with Brigdens, working with Charles Comfort, Andre Lapine, Will Ogilvie and Fred Finley. Career with Sampson-Mathews, working with Frank Carmichael, A.J. Casson and Joe Gauthier.